The second day of the First Annual National Conference on Urban Resilience started of with the third plenary session on Participatory Vulnerability Assessment organized by ICCCAD-IUB. The session’s keynote speaker Mr. Terry Cannon of Institute of Development Studies, UK covered an interesting topic on participatory vulnerability assessment where Mr. Cannon challenged the term Resilience in the current status quo. He highlighted key aspects why perception of people in understanding resilience is important and asked people to question problems by asking the “whys” of any situation more vastly. The second part of the day started with three parallel sessions conducted by Practical Action Bangladesh, ACCNLDP Project and Save the Children. 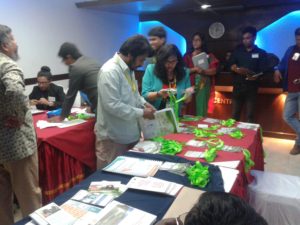 Practical Action Bangladesh highlighted how untreated waste and improper use of resources can lead to high amount of waste generation and came up with different practical treatment process to tackle the waste problem in the urban context. Their development practice has supported 378k people where 58% are women. Transforming waste into wealth through green practices is one of the main focus areas they are using to promote resilience. 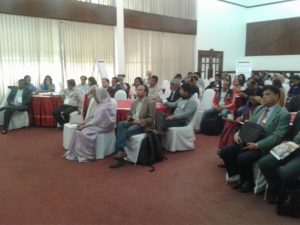 Save the Children hosted the topic of Building Resilience in a city. They urged that cities are lifelines of society and engines for economic growth. Going into the session they approached participants and stakeholders on how to reduce vulnerability. Currently they work with urban children who are using their concepts of survival in a concrete jungle to face Climate Change by becoming self-reliant. A K M Mamunur Rashid of UNDP climate change specialist highlighted the importance of communities to adapt and protect them from disaster related shocks.
The joint sessions of ACCNLDP Project, Planning Commission and GIZ has highlighted on the integration of local plan in national development on their session tilted as “Development Planning Needs Better Integration”. One of the panelists Dr. Khurshid Zabin Hossain Taufiq, Director of Urban Development Directorate (UDD) has discussed about the local planning practices from the government side.

The First Annual National Conference on Urban Resilience continues to engage participants and different stakeholders from different government and non-government organizations, private sectors, NGOs /Donors/INGOs, academics and communities to come up with more sound solution under the context of urban development.

The second part of today of the First Annual Urban Conference consisted of three productive parallel sessions. The sessions were conducted by United Nations Development Program, Care Bangladesh and ActionAid.

UNDP conducted a session on Creative Thinking for an Uncertain Urban Future tried to come up with solutions for the greater urban problems of infrastructure and services. Dr. Saiful Momen shared his idea of “adopting a canal” by any group of people so that they can take the responsibility of looking after it. Mousumi Pervin told her dream of a green home in a new silicon city. She sheds light onto 4 solutions that are decentralization of functions and responsibilities, efficient urban planning, improved city governance and coordination among the different service providers. Innovative ideas from the audience were creating cities that can produce its own food, dictated an idea of a self-resilience city. Lastly the session chair, Dr Saleemul Huq shared his view of not seeing rural urban migration as a problem and states his idea of creating a challenge fund for cities outside the capital city to incentivize migration to those other cities, as a reward. Apart from this he also calls upon the younger generation to take up the challenge of climate change issue in Bangladesh as a prospect to harness the skills of tackling it and be able to share that knowledge with other countries.

The second parallel session by Care Bangladesh of Universal Health Coverage: Resilient to Health Shock of Urban Low Income Population sought to answer and procure ideas on how to resolve health inequalities in Bangladesh. The key note speaker of this session Dr. Muhammod Abdus Sabur, Public Health Professional and Consultant, Ministry of Health and Family Welfare addressed the public on how resources should be used efficiently to generate more effective health services. The participants responded by saying that government hospitals should stay open for 24 hours to address the vulnerable communities and private hospitals should provide minimum 10 to 20% of its services to the poor.

The third parallel session was hosted by ActionAid with an amazing interactive session on how to make “safer city for women”. The session was chaired by Farah Kabir country director ActionAid. The session started off with the video showing what women require and lacks basic rights in the greater urban context. The video showed problems of basic services like transportation, proper street lights and public washrooms in our city areas. The audience suggested better public transportation, improvement of bus stands, more accessible public toilets to the panelist as prospective initiatives for the general population with the idea of making our society more women friendly. The session’s panelist respected Dr. Engr. Tariq Bin Yousuf, Superintending Engineer in Environment, Climate Change & Disaster Management Circle & Project Director of Urban Resilience Project, Dhaka North City Corporation ended the session with the promise to the audience about the city corporation’s initiatives to make the city safer integrated for women.