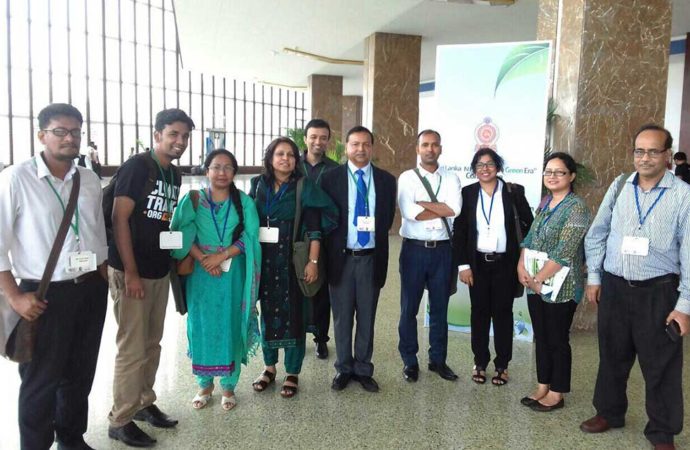 Earlier this month, the fifth Asia Pacific Climate Change Adaptation Forum was held in Colombo, Sir Lanka. This year’s theme was “Adapting and Living below 2C.”

This is because the UN climate treaty — the Paris Agreement, which goes into force next week — set a upper temperature limit of 2C warming above pre-industrial temperatures.

Given that Bangladesh is a country that desperately needs to adapt to climate change, we thought we’d share some of the lessons we learnt while in attendance.

The forum was unique in that it brought together around 800 delegates from about 50 different countries to share knowledge and best practices on how to adapt to climate. This includes everything from how adaptation should be planned by government agencies to different types of technologies that will help those at the frontline of climate change to survive (and even thrive, hopefully).

Here are some of the discussions that arose from the forum:

Thinking adaptation finance
According to Dr Barney Dickson, who works for the UN Environment Program, the cost of adaptation finance in the Asia-Pacific region could be around $140-300 billion per yer by 2030.

This is a lot of money needed for adaptation, and many at the event proposed different ways to source and manage the funding required.

One idea was creating multi-year national budgets in certain climate change-related sectors. This was put forward by Dr Pinaki Chakraborty from the National Institute of Public Finance and Policy in India. While most countries determine their national budget on a year to year basis, given the potential catastrophies of climate change, Dr Chakraborty suggested this might be short sighted. A better approach would be to plan budgets for certain sectors for over the course of a few years to take account for the longer term of adaptation when needed.

Another common thread throughout the conference for how to pay for adaptation was engagement with the private sector. As explained by Harsha de Silva, the deputy minister of foreign affairs of Sri Lanka, “while civil society does have money, it doesn’t have ‘real money’ to bring about the changes that scientists say are necessary to combat climate change.” He argued for an “alignment of interests” between the public and private sector to support adaptation.

It is worthy noting that several Bangladesh businesses are already engaged in helping the country adapt to climate change. However, the government should encourage the private sector more to get involved. This also helps the country not rely on donor funding, and instead on in-country sources.

‘Loss and Damage’ and quest for evidence
Loss and damage is still a very contentious issue, because for industrialised countries — these two words are synonymous for “liability and compensation.” Nevertheless, it is important that countries start to address the impacts of climate change that cannot be adapted to.

There was only one session at the forum dedicated solely to this issue, and it was organised by the Asia Pacific Network and the International Centre for Climate Change and Development at the Independent University, Bangladesh.
The session emphasised that it was unlikely that industrialised nations were going to provide blank checks to compensate for the damages and losses caused by every natural disaster that could be related to climate change. Instead, the conversation should really be about any added and incremental damages or losses worsened by climate change.

Only by having this data could South Asian countries show the natural disasters they face have been worsened by climate change. However, as Hina rightly said, given the current political reality, regional cooperation is akin to shooting for Pluto.

Could Bangladesh make its voice heard?
Several participants from Bangladesh, including government officials, academics, researchers, and practitioners attended the event. However, unlike other countries represented at the forum, there was no high level political representation from Bangladesh.

Additionally, the media coverage of the event by Bangladeshi journalists was slim, which is a pity since Bangladesh missed an opportunity to highlight its own excellent policies and investments in adaptation.

Originally this article was published on October 29, 2016 at DhakaTribune by Naznin Nasir and Feisal Rahman, both work at the International Centre for Climate Change and Development (ICCCAD) at the Independent University, Bangladesh(IUB). Feisal Rahman is also faculty at the Department of Environmental Science at IUB.