Let me congratulate the Philippines for having led the CVF through a critical period and for helping achieve its signature success, the inclusion of the 1.5C long term goal in the 2015 Paris climate agreement. At the same time, let me also congratulate Ethiopia for being elected the incoming Chair of the CVF who will have to lead the CVF to the even more daunting task of actually implementing the Paris Agreement on 1.5C.

The CVF came into being in 2009 under the leadership of the Maldives who were the first Chair of the Group. At that time it consisted of around a dozen or so vulnerable countries drawn from three pre-existing groups of vulnerable developing countries. These were the Least Developed Countries (LDC) Group, African countries and Small Island Developing States (SIDS) and it was created as a high level political leadership group for the vulnerable countries and not as a new negotiating bloc under the United Nations Framework Convention on Climate Change (UNFCCC). It also chose to focus on advocating for a single global ambition, namely setting the long term temperature goal of 1.5 Degrees Centigrade as the accepted long term goal of 2 Degrees was not acceptable to us. Since that first meeting in 2009 the CVF has evolved over time with the leadership passing from Maldives to Kiribati and then to Bangladesh and then Costa Rica and finally to Philippines. Now it is about to pass on to Ethiopia. Over this time I will recall a few major achievements and evolutions in the CVF. Firstly, the achievement of the 1.5C long term goal in the Paris Agreement in COP21 was by far the biggest achievement of the CVF as well as the LDC, SIDS, Africa Groups. I would like to recall that going into COP21 on the 30th November 2015 there were just over 100 vulnerable countries supporting the 1.5 Degree long term goal with none of the developed or larger developing countries in support.

Report: Ethiopia takes over as chair of Climate Vulnerable Forum

By the end of COP21 on 12th December 2015 all countries had been persuaded to support our position. This was achieved by unrelenting and focused diplomacy, partnerships, advocacy, support from civil society and media by all the vulnerable countries both individually as well as collectively. The second major achievement of the CVF over the last few years has been to attract over forty countries to join the group from the initial dozen or so which are no longer confined to the LDCs, Africa and SIDS only. Thirdly there has been a major evolution in the narrative of the CVF which initially started with a focus on our collective vulnerability to the adverse impacts of human induced climate change but it has now re-focused on our pro-active efforts to tackle those adverse impacts of climate change. We have evolved from a group emphasising its collective vulnerability to one that is now focusing on pro-active actions to tackle climate change, both on adaptation as well as mitigation. 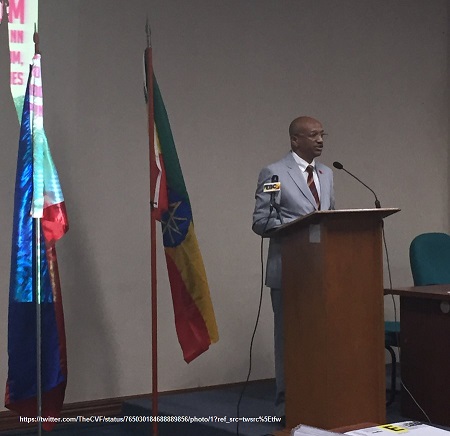 Thus for example the CVF Finance Ministers have formed their own group called V20 where they have promised to provide finances at national level to tackle climate change. This is just the start. CVF countries are not just becoming champions of taking action locally and nationally; they are also moving forward to share their knowledge with each other. A sign of this is the new South-South Centre on Climate Services being set up by the Philippines based in its national climate centre in Manila. As we turn to a new leadership of the Climate Vulnerable Forum from Philippines to Ethiopia we may wish to think of renaming the “V” in our name. Let us think of ourselves not just as the “Climate Vulnerable Forum” but from now on as the “Climate Visionary Forum” who will provide global leadership to tackle climate change .