The original article was published as POLITICS OF CLIMATE CHANGE at Daily Star, an Op-Ed by Dr. Saleemul Huq. 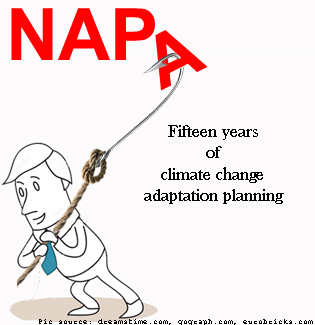 Under the United Nations Framework Convention on Climate Change (UNFCCC), at its 7th Conference of Parties (COP7) held in Marrakech, Morocco in 2001, adaptation to climate change was recognised for the first time through the mandate to support the Least Developed Countries (LDCs) in carrying out National Adaptation Programmes of Action (NAPA). Since then, all 48 LDCs have finished their respective NAPAs and have also started to implement their priority adaptation projects, funded by the LDC Fund (LDCF) and set up to support the NAPAs.
Since then, under the Cancun Adaptation Framework agreed at the 16th Conference of Parties (COP16), countries have moved on from NAPAs to National Adaptation Plans (NAPs), which were meant to be longer term and more mainstreamed into national development, rather than just a set of standalone adaptation projects that happened under the NAPA process.

Last year, at the 21st Conference of Parties (COP21) in Paris, where the Paris Agreement recognised the need to develop a global adaptation goal with all countries, not just LDCs or even developing countries when preparing NAPs. There is also an annual event called the NAP Expo organised every year in Bonn, Germany, to bring together country NAP teams to share knowledge and experience. The latest NAP Expo was held in Bonn in July this year. where a number of lessons were shared from the last fifteen years of adaptation planning at the national level.

I was invited to give the keynote speech at the closing plenary and am sharing below some of the key lessons that have emerged from the experience so far.

Perhaps the biggest experience that has been achieved, to greater or lesser extent, in every country is that adaptation to climate change is too big and important for a country to be assigned to the Ministries of Environment only. It requires the main ministries, such as Planning and Finance, need to be involved. This is happening in different ways in each country.

Bangladesh has already started to mainstream climate change into both ministries of Planning as well as Finance.

Another new dimension of the adaptation agenda is the realisation that adaptation to climate change impacts is not just for LDCs or even for developing countries, but is also needed in rich countries, as they are now also feeling the adverse impacts of climate change. Thus, even countries in Europe and the United States of America are also preparing their national and local adaptation plans.
Thus, after the Paris Agreement, adaptation as well as mitigation is now a universal need for all countries, both poor as well as rich.

As countries and communities have started planning as well as implementing adaptation activities, they are gaining considerable amounts of experiential knowledge of what works and doesn’t work in practice.

Much of this knowledge is unique to each country, but some of it is generic and transferable from one country to another. Hence, there is much experiential knowledge being gained between countries by learning from each other’s experiences.

Need to have sustainable systems:

Perhaps the biggest change from the NAPAs to the NAPs is the need to shift from ad hoc project based approaches to adaptation to a more sustained and systemic process of incorporating adaptation into national, sectoral and local level plans and implement them in every country which requires a national mandate to sustain the process over time.

This is just the beginning for every country. In Bangladesh, the 7th Five Year Plan has done so to some extent and the upcoming Perspective Plan to 2040 will be another opportunity to embed it into national planning.

As countries and communities have started planning as well as implementing adaptation activities, they are gaining considerable amounts of experiential knowledge of what works and doesn’t work in practice.

Much of this knowledge is unique to each country, but some of it is generic and transferable from one country to another. Hence, there is much experiential knowledge being gained between countries by learning from each other’s experiences.

Another aspect of the experience of planning and implementing is the fact that least developed countries were the first to start planning and implementing adaptation programmes, and thus, have been moving up the knowledge ladder faster than others, including the rich nations. As a result, LDCs, including Bangladesh are in a position to share their experiential knowledge on adaptation with the richer countries.

In the last fifteen years, since COP7 in Marrakech, much knowledge has been gained across the world on planning as well as implementation of adaptation to climate change. Coincidentally, the next Conference of Parties (COP22) will again be held in Marrakech in November this year, where the achievement of a global adaptation goal will be on the agenda as part of the Paris Agreement.

The writer is the Director, International Centre for Climate Change and Development at the Independent University, Bangladesh. Email: saleemul.huq@iied.org