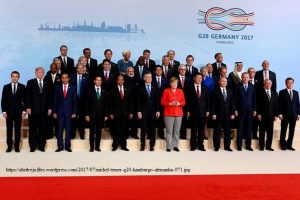 The G20 meeting of leaders of the world’s 20 biggest economies ended a few days ago in Hamburg, Germany with a strong statement of commitment for implementing the Paris Agreement on Climate Change by 19 of the leaders, with the exception of President Trump who has decided to withdraw the US from the Paris Agreement.

This marks the effective split of the G19 from the US on the issue of climate change. It also marks the transition of leadership to Chancellor Angela Merkel of Germany who was able, through pre-summit diplomacy, to get all 19 leaders to agree to not let the US derail their statement, which is what would normally happen to ensure unanimous agreement of all leaders. This was symbolically evident in the group photo where Chancellor Merkel stands out in her bright red outfit in the middle of the group of similarly dressed older white men in suits, where it is difficult to pick out President Trump from the crowd!

This is not the first time that the US has refused to join a global consensus on climate change as it happened once before in 1997, when the Kyoto Protocol was agreed at the 3rd Conference of Parties (COP3) of the United Nations Framework Convention on Climate Change (UNFCCC), including by the US under President Clinton in the White House and Vice-President Al Gore who himself was in Kyoto. However, soon after that the Republicans won the presidential election and George W Bush became president and decided to withdraw the US from the Kyoto Protocol. He also lobbied other countries to join the US and did manage to get Prime Minister Howard of Australia to join him in withdrawing from the Kyoto Protocol.

However, this time around no other country has joined the US in withdrawing from the Paris Agreement and countries like China and India (the biggest and third biggest emitters of greenhouse gases, respectively) have even pledged to enhance their actions to combat climate change.

If this had happened only a few years ago it is likely that countries like China and India would have refused to abide by their commitments if the US decided to withdraw. However, that China is now in fact willing to become a leader in the field of renewable energy and in decreasing dependence on fossil fuels, especially coal, is a sign of greater level of understanding about the global nature of the climate change problem. An interesting, perhaps unforeseen, consequence of President Trump’s decision to withdraw from the Paris Agreement is the upwelling of support from mayors of dozens of cities and governors of major states like California to pledge commitment to implement the Paris Agreement. The UNFCCC has responded by allowing provinces and cities to sign up on their own to implement the Agreement. Thus, the implementation of the Agreement no longer depends only on heads of government but can also be done by each and every one of us from any country.

Another interesting development is the creation a few years ago of the V20 (Vulnerable 20) Group of the most vulnerable countries as a counterpart to the G20 to advocate for stronger action to tackle climate change by G20 and all other countries as well. This V20 Group, currently chaired by Ethiopia, was set up by the Climate Vulnerable Forum (CVF) of which Bangladesh is a founder member and previous chair. The V20 has now become a leader in tackling climate change and is moving towards 100 percent renewable energy by 2050.

Originally this article was published on  July 05, 2017 at Daily Star. The author Dr. Saleemul Huq is the director of the International Centre for Climate Change and Development (ICCCAD) at the Independent University, Bangladesh (IUB).
Email: saleem.icccad@iub.edu.bd