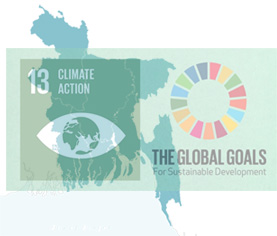 At the turn of the century, under the United Nations, all countries agreed to try to achieve a set of ten Millennium Development Goals (MDGs) by 2015. Bangladesh was relatively successful at achieving most of them.

Since then, all countries have negotiated and agreed upon a set of seventeen Sustainable Development Goals (SDGs) to be achieved by 2030.

Besides the number of goals going up from ten to seventeen, there are several other significant differences between the old MDGs and the new SDGs.

The first big difference is that while the MDGs only applied to developing countries, with the role of developed countries being relegated to only funding, the SDGs require every country to take actions at home to reach each of the goals.

The second big difference is in the inclusion of several new goals that were not there before. One of the most significant ones being SDG 13, which is on climate change.

I will discuss the implications of this new goal on climate change (SDG13) in the context of Bangladesh. First, however, let me describe how climate change is also being dealt with under the United Nations Framework Convention on Climate Change (UNFCCC), which is in parallel to the SDG process.

Under the UNFCCC, all countries have agreed to take actions under the Paris Agreement (even if we are still not sure if the US will remain in the Agreement) in 2015 with a timeline for implementation also by 2030. This in turn has two big climate change goals, namely one on mitigation (to keep long term global temperature rise to well below 2 Degrees and if possible below 1.5 Degrees), and also a Global Goal on Adaptation (GGA).

The latter is a new goal, and it is still not clear what it consists of, as adaptation to climate change is much more difficult to measure at global scales.

Nevertheless, all countries need to figure out how to achieve the Paris Agreement (PA) goals on climate Change along with SDG 13.

In Bangladesh, the government has already started the process of mapping and then planning how to implement both the SDGs as well as the PA. Under the Planning Commission, the mapping of responsibilities of different ministries regarding each SDG has been done, and a unit has been set up in the Prime Minister’s Office to monitor progress.

For the PA, the Ministry of Environment and Forest (MOEF) has taken the lead, but as climate change affects every sector, this ministry cannot achieve the goals alone, and will need all other relevant ministries to be involved.

Moreover, the successful implementation of plans and achievement of both the SDG and PA goals cannot be achieved by the government ministries and agencies on their own. It will require the inclusion of many other stakeholders, including the private sector, the education sector, the research and knowledge sector, as well as others.

The private sector has the biggest role to play, starting from the investment sector of banks and insurance companies making green investments. As for the construction sector, it needs to ensure that all structures, both for infrastructure as well as buildings and housing, need to be both green as well as climate resilient. Another very important sector is the energy sector where the emphasis needs to shift from fossil fuel based to green and renewable energy investments. The agriculture sector also needs to be involved in climate resilient technologies and investments.

At the same time, media houses have a very important role to play in raising public awareness about both sustainable development as well as climate change.

For the longer term, the education sector, from primary to secondary to tertiary sectors, all have a role to play to educate children, youth and others to become green and climate aware.

Finally, achieving success in both SDG 13 as well as the PA lies in the nation’s ability as a whole (within as well as outside the government) to collectively learn-by-doing, i.e. become conscious about climate change by knowing what to do about it. Here research and knowledge stakeholders will have a big role to play.

If all the actors work together in harmony with each other, then Bangladesh will be able to achieve both SDG13 as well as the climate change goals.

Originally this article was published on May 16, 2017 at Daily Star. The author Dr. Saleemul Huq is the director of the International Centre for Climate Change and Development (ICCCAD) at the Independent University, Bangladesh (IUB).
Email: saleem.icccad@iub.edu.bd