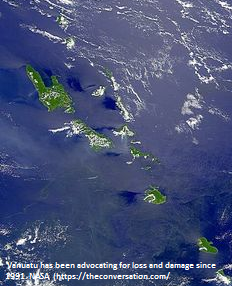 With the activation of the Paris Agreement, the issue of loss and damage becomes a central tenet of international climate governance. The UN climate body is now committed to address the impacts of climate change that go beyond adaptation. These include everything from islands sinking in the Pacific Ocean to infrastructure damage during cyclones. This is somewhat surprising given how contentious the issue of loss and damage has been at climate talks. Arguably, the first reference to the concept was proposed in 1991 by Vanuatu, whose negotiators unsuccessfully argued for an international risk insurance pool to deal with the adverse affects of climate change. Vanuatu has been advocating for loss and damage since 1991. NASA But it took until 2014 for the UN climate body to establish a separate mechanism, called the Warsaw International Mechanism. This mechanism consists of nine action areas ranging from how best to finance loss and damage to how to deal with the impacts of climate change not easily valued in the market (the loss of home, tradition, culture and so on). Even with this in place before the Paris negotiations last year, several developed countries, including the US, were uneasy about including loss and damage in the agreement. This is because they were worried this issue would quickly bring up the question of whether developed countries could be held liable and have to compensate for their share of greenhouse gas emissions. A comprise was reached in negotiations where a separate article in the agreement was dedicated to loss and damage, but the notion of compensation and liability were explicitly ruled out. The article on loss and damage in the Paris Agreement mainly focuses on supporting the Warsaw mechanism. The next round of climate talks in Marrakesh will be important, because it is when the negotiators are expected to come to a decision on a five-year rolling working plan for the mechanism. This plan is yet to be determined, based on the last meeting of the executive committee of the Warsaw mechanism (made up of an equal number of representatives from developed and developing countries). In particular, separate task-forces will be created to address issues such as migration and non-economic loss and damage. An information hub for comprehensive risk management (that is, microinsurance) will also be established. The Paris Agreement is significant, because it establishes a new approach to climate policy, whereby climate change-related loss and damage will have to be addressed alongside mitigation and adaptation.

Originally this article was published on Sunday November 4, 2016 as an article at THE CONVERSATION. The writers Meraz Mostafa, working with the International Centre for Climate Change and Development (ICCCAD) at the Independent University, Bangladesh (IUB). Email: meraz.mostafa@icccad.net