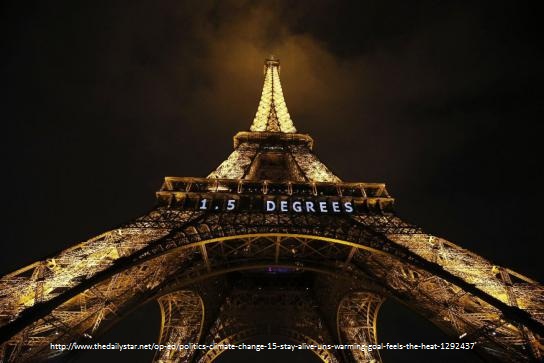 The tougher temperature goal was a great victory for the vulnerable countries in terms of global diplomacy and advocacy. Now comes the hard part of implementation.

One of the most hotly contested and far reaching outcomes of the Paris Agreement agreed last December was the inclusion of the long term warming limit of 1.5C above pre-industrial levels.

Going into that summit on the 30 November 2015 there were only around a hundred of the most vulnerable countries from small island states, Least Developed Countries (LDC) and Africa Groups who supported the inclusion of the goal.

None of the developed countries and also none of the larger developing countries such as China or India supported the inclusion.

Over the following twelve days, by effective diplomacy of the vulnerable countries groups, the Climate Vulnerable Forum (CVF) under the leadership of the Philippines and the High Ambition Coalition led by Marshall Islands and USA along with strong support from civil society groups every single country was persuaded to include it in the agreement.

That was a great victory for the vulnerable countries in terms of global diplomacy and advocacy. However, now comes the hard part of implementing that agreement.

There are many voices challenging the possibility of keeping below 1.5C given that we are already above 1C from pre-industrial levels.

The next battle will now take place in the scientific community to determine the feasibility of keeping below 1.5C.

The Intergovernmental Panel on Climate Change (IPCC), at the request of the UNFCCC, has agreed to prepare a Special Report on 1.5C to be published in 2018 in time to inform the Global Stock Take that year.

The initial scoping meeting for that Special Report was held in Geneva last month and the outline for the report was developed for approval by the IPCC Plenary meeting in October in Bangkok.

In order for the IPCC Special Report on 1.5C to have sufficient peer reviewed scientific literature for an effective assessment it is important for the scientific community, both natural as well as social sciences , to carry out relevant research and publish in time for the IPCC to cite their articles.

The conference on 1.5C: Meeting the Challenge of the Paris Agreement held in Oxford this week has brought together natural and social scientists from around the world to highlight this need to generate scientific evidence on the potential to actually reach the 1.5C target.

We know it is still possible to limit warming to safe levels – that is abundantly clear from presentations at this week’s event.

But the bottom line on whether or not the world is able to keep below the 1.5C level depends on political will from the leaders of governments to take necessary actions but even more on the willingness of the ordinary people in every country to push their leaders to do the right things.

Even though keeping global temperature below 1.5C may be extremely difficult, it still remains possible if the needed actions are taken by leaders and supported by people around the world.

Humanity will have to show whether we are up to the challenge.


The writer is the Director, International Centre for Climate Change and Development at the Independent University, Bangladesh. Email: saleemul.huq@iied.org

The original article was published as POLITICS OF CLIMATE CHANGE at Daily Star, an Op-Ed by Dr. Saleemul Huq, Director of ICCCAD.