After seven hours of road travel, including a ferry trip on the Padma water route, I arrived in Khulna, the second port city of Bangladesh. This was my second visit to Khulna. I first came here six years back and then the city was quite bustling, but now it looks gorgeous and is easy to move around. The bus from Dhaka dropped me at Royal Circle in Khulna city at midnight, from where I was supposed to go to the hotel where my colleagues were waiting. Honestly, walking along the street at midnight I was not frightened of the muggers rather than the great Royal Bengal Tigers. Yes, I know, tigers live far away from here but I was brought up listening to thousands of stories about Khulna and the Royal Bengal Tiger. Things finally settled when I got a battery rickshaw that brought me to the hotel. Instead of sleeping off the toll of travelling, I reread the work plan that I received for the field visit here. We were asked to visit the eight model villages where VSO (Volunteering Services Oversees) is working with youths through local Community-Based Organizations (CBOs).

The model villages are situated in Khulna district, mostly in Shatkhira and Bagerhat. These are proximate areas of the Sundarbans, the largest patch of Mangrove forest in the world, which is also the hub for the Royal Bengal tigers. So each day we travelled from Khulna to those villages. The journey was quite hectic under the stuffy weather but when you see how local youths are building the villages with limited resources and coping with high rates of salinity intrusion in the agricultural fields, it doesn’t seem important anymore. One example of such efforts is found in Shankar Kathi Sototat Songha, a local youth club made up of thirty-six school kids. The members of this club are working for their village by installing solar panels in households, using traps to destroy the insects in the fields, employing pond sand filters for fresh drinking water and bio-gas plants for gas supply, and making organic fertilizer. When the local youths were asked what kind of support they wanted in the future, they replied that they need training on advanced agricultural practices and that they also want ICT training.

A unique thing about these youth clubs is that they also mobilize other CBOs in the area. When visiting the model villages, we discovered the farmer’s club and the mother’s club. The farmers club get training on agricultural seeds and how to use hybrid seeds. Each week they call a meeting to find solutions to identifying problems with agriculture. Now they are thinking deeply about each upcoming day, as each day the scarcity of drinking water is causing problems in their lives. The problem is so dreadful that they are considering finding alternative professions to agriculture. Some of them are preparing to migrate to another village to secure a better livelihood. The mother’s club work for the better health of mothers. The members of this club get health training and give advice to new mothers. The farmer’s club and mother’s club inform the youth club of their problem or plans and the youth club then takes the initiative to act accordingly. Now, all the members of mother’s club have a health card to ensure service from the health center. They are also looking for training on handicrafts and tailoring services so that they can be self-sufficient and at least buy drinking water from other villages when they lose access to their own drinking water. What is clear is that the shortage of crucial resources, such as gas and electricity, and the limited availability of fresh water in these parts of the country, serve as a severe deterrent, but the youth in the area have continued to strive for success, despite such formidable setbacks. 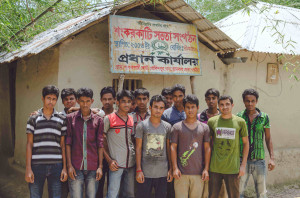